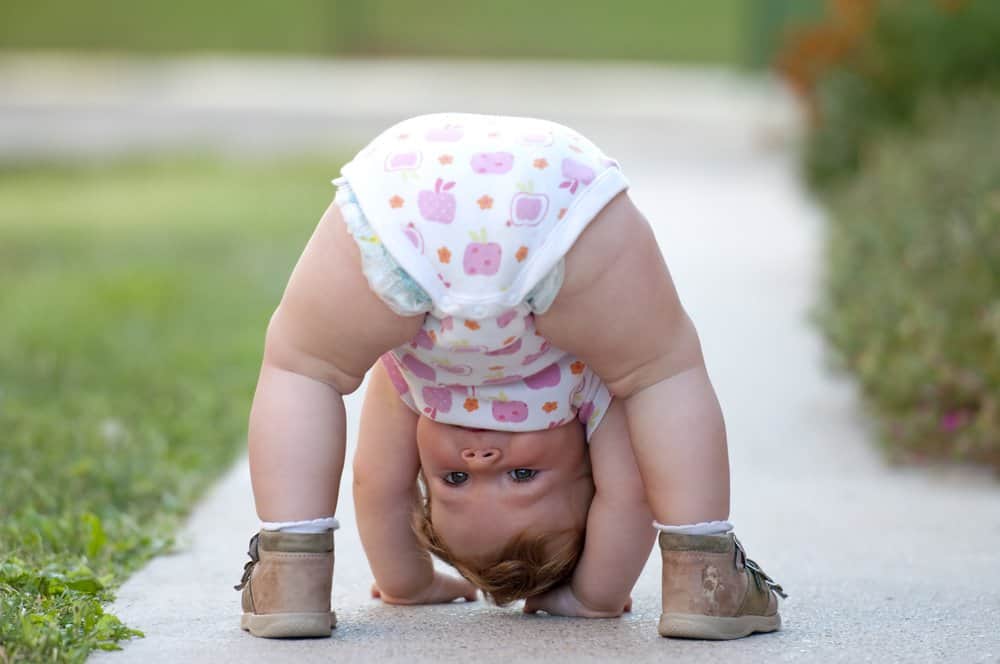 Babies make all sorts of movements when they are growing up.  When they reach toddler age they will do all sorts of things from climbing places, rolling on the floor, bending over and even making faces.

So what does it mean when a baby bends over? There are many reasons to explain this with most of them being simply old wives’ tales.

What Does It Mean When A Baby Bends Over? According to an old wives tale by Belizeans, when a child bends over forward and looks between his or her legs this could mean that they are looking for their sibling.  It interestingly means that the mother will have another child soon.

Raising a baby is usually confusing and stressful for many parents and this is why most new parents will rely on the traditional wisdom and the experiences of others to help guide their parenting decisions.

Some parents will consider traditional knowledge while others may view it as bizarre or irrational. In some instances, they might dismiss it as mere superstition.

However, superstitions especially when it comes to parenting came about to put control over the randomness of life and the hurdles that come with parenting.

Parents, therefore, act on superstitions to protect their offspring from the unpredictable outside world.  How real or certain a custom or happening is interpreted always depends on a parent’s personal belief.

To make the blurry line between superstition and age-old wisdom clear cultural lenses are therefore used to view these traditional explanations of these things that are happening with the baby.

Many of these traditions came to be during the era of high infant mortality and they were to provide much-needed comfort. This is why parents around the world have embraced beliefs such as the meanings of why a baby bends over and many others.

Other Reasons Why a baby bends over

There are other reasons why a baby bends over and they are as follows:

The baby could be bending over because they are simply active. They might look like they have enough energy to fuel a turbine which results in never a dull moment when the baby is awake.

They could not only be bending over but running around, climbing up on places and doing all sorts of things making it exhausting for the parent or caregiver to keep up with.

While it is always important to encourage your baby’s exuberance and give them enough room to play and explore, it is also very vital that you teach him that he sometimes needs to settle down lest he hurts himself. Of course, always keep your child’s environment safe for them to play in.

Maybe they feel great when they do that or they simply want to stretch.  When they feel like doing it and do it, then there is no reason why or there is one reason that the parent is not aware of it.

Sometimes the baby will bend over while standing, sitting or sleeping.  This could also be for the simple reason that it makes them comfortable.

Most babies love sleeping while bent over because their body feels comfortable in that position.  Most of the time they will just fall asleep while on this position and when you move them they might awake to cry.

If your baby loves sleeping bent over then it could be no other reason than the fact that they feel comfortable. 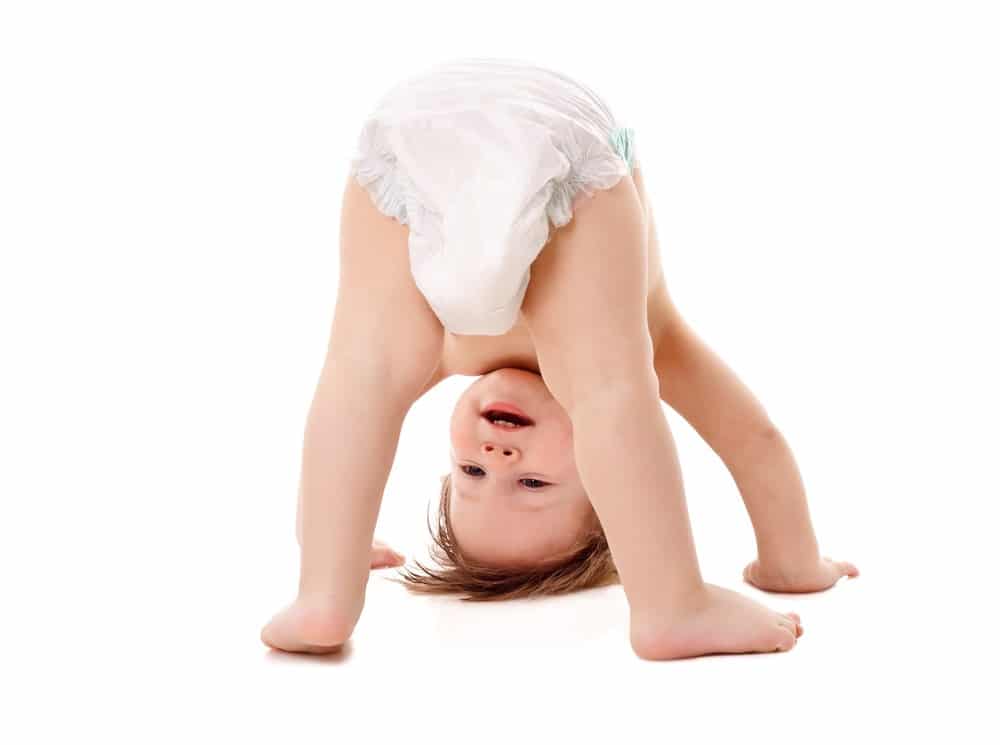 The baby could be bent over with their head between their legs for another simple reason they love viewing things from that position.  The upside-down position fascinates them and in some cases, the baby might even move around to look at everything from an upside-down angle.

According to most superstitions, it is believed that when a baby does this, they are looking for their brother or sister. This is interpreted as the mother will soon be expecting another child.

But it might just be that the baby is just loving the upside-down or sideways view and that is why he keeps bending over and looking.

Hiding from someone or something

When the baby bends over on a seat, they could also be hiding from something or someone especially if there is a barrier that protects them from being seen when they bend.

They could either be hiding because they are playing peek-a-boo or they are scared of something or bored with a certain game. If they are bending over a chair or something, then this could explain the reason.

Other questions about things that a Baby does

There are also other things that a baby does that may have or may not have an explanation and they are as follows:

Why Does it mean when a baby stands on their head?

A baby can do quite baffling things  and most of the time we have no idea why they do them.  For example, why would they even stand on their heads? Most of them when to keep this posture and we don’t know why.

Being upside down is a great way for a child to learn about their body and the sensations they experience when they are in that position.

They develop body awareness such as sensory and muscle memory. Considering that it is known to be a play or silly activity, it is quite important according to these child experts.

According to these same experts, playing bent over has also been known to stimulate the vestibular system which is part of the body’s sensory system that keeps the body aware of its environment.

Children’s brains and vestibular systems are undergoing a training process that involves interacting with their surroundings and building sensory and motor connections in the brain.

The vestibular system is therefore very important when it comes to balance, motor movement, cognition, and orientation.

The positioning of the child’s head and the sensation of being upside down is also known to aid the brain form strong connections that help the muscles to hold the head upright.

In the process, this upside-down posture helps provide neural feedback about the child’s movement and the world and around him.

The bending over is not always about stimulation and strengthening only, it also brings about this calming effect on children. Some babies will seek this position when involved in active play while others will find it calming as they wind down and rest after a busy day of play.

Since the child has taken this position before during the last trimester of a pregnancy before they are born, some babies might resume this position to seek peace and comfort.

When does bending over for your baby become abnormal?

Often when they bend over and then come back upright it is okay, but if they seem to be in any sort of pain or develop a curve in their spine,  then that should be a cause for concern.

However, if they are happy and playful, then simply let them enjoy the calming effect and the developing awareness of their senses.

Many myths and superstitions have been associated with when a baby bends over.  Whatever you believe will depend on what you have been believing all along.

If you want to go to the experts’ way,  it is still okay and a great way of learning about your child’s neurological development. If you have embraced the superstitious way, then it can also be quite fascinating.